Read More..."> Elizabeth Pollitzer: “If gender equality works in science, it can be applied to the entire society” – Gender Summit 12

Elizabeth Pollitzer: “If gender equality works in science, it can be applied to the entire society” 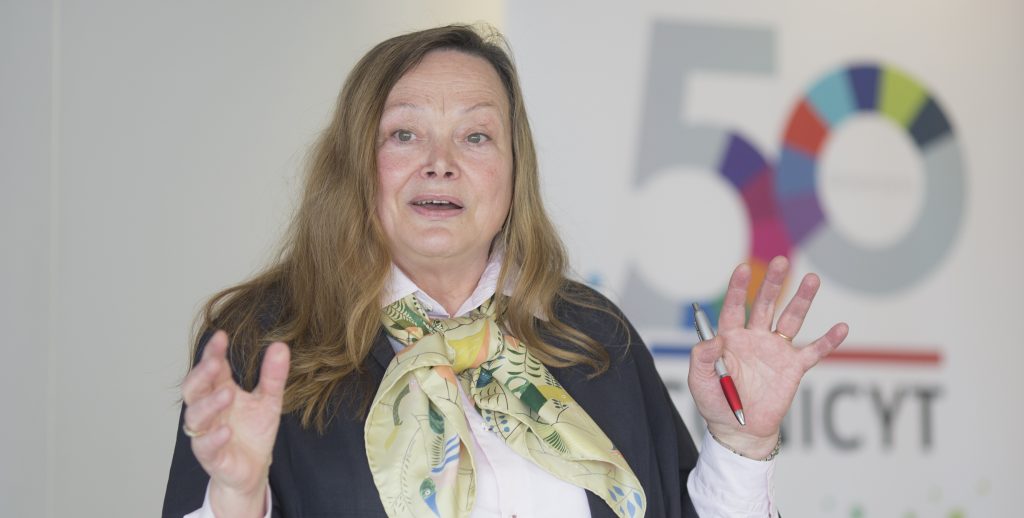 “Your science is not quality if it does not include women”. With this phrase, Elizabeth Pollitzer has told to scientists around the world that the gender dimension in their disciplines is not just a matter of goodwill, but determines the excellence of their work. The current director of the Portia organization is the creator of the Gender Summit, an international event dedicated to communicate through empirical evidence the benefits of gender equality in science, technology and innovation, and the first version in Latin America and the Caribbean organised by CONICYT.

Elizabeth always wanted to be a scientist. Since she was a child, she wanted to study medicine and always imagined herself pursuing a career in biology. At age 18, she had to leave his native country, Poland, and she lived in Austria and Australia for a few years. However, she imagined her future in the great English cities. “I did the paperwork for the visa and in less time than expected I obtained the British nationality”, Elizabeth says, who has been living in London since then, and has been dedicated to research.

After participating in a work reinsertion program for women and having felt the negative effects of gender stereotypes, Elizabeth decided to create Portia, an organization that designs and implements strategies to improve the quality of research and innovation through equity mechanisms. “I am convinced that if you cannot change society, which is very difficult, you can change institutions, and I firmly believe that the best place to do that is science and innovation”, she says.

The quality and excellence of science is something that moves Elizabeth Pollitzer. After creating Portia, the researcher was convinced that they had to talk to decision makers. That is why she proposed to create the dialogue platform called Gender Summit. “It is not only about social justice, it’s about excellence. Therefore, unless you can prove that having 50% of women in the lab will improve the quality of work, researchers are not interested. That was my conclusion, and that was what I wanted to demonstrate with the Gender Summit”, Pollitzer says.

First with the European Parliament and then expanding across the globe, the Gender Summit began to communicate empirical evidence that showed not only that there should be more women in the sciences, but that all research and quality studies should have a gender focus in his observations, subjects of studies and outcomes.

Regarding the difficulties that exist to position the subject of gender in science, Elizabeth recognizes that this is a recent issue but it is an opportunity. “If gender equality works in science, then it can be applied to the entire society. Society looks at science to see the right knowledge, and that knowledge says that sex and gender differences are important”, she explains.

According to the director of Portia, including this gender dimension does not have to be only for the investigations but also it is important the process of evaluation and how to communicate the results. “When evaluators look at the proposals, do they ask if the subjects of study are men or women? If the evaluators are not familiar with the discussion about gender issues, it will be quite difficult to understand how to define this quality”, Pollitzer says.

What would you say to young women who want to start a career in science?

I think all women should study science. You can take your knowledge to development, innovation or civil society, and you will be much better equipped to understand the interactions of the environment, society or decision-making. If you start with science, it is much easier to include yourself in other fields. Today, with the sustainable agenda and the fourth industrial revolution, what we really need are women who are aware that the solutions that are being produced may not benefit them, and unless they are there, where the solutions are thought of, nobody will think for them.

Finally, what would you say to women who are already in science to work for gender equality?

Actually many women in science feel that they have to be only scientists and somehow they think that gender problems do not apply to them. I think it is because they feel that they are going to be criticized for talking about “non-scientific” topics. In fact, they can talk about gender as scientists; they do not necessarily have to refer to social rights. They can use completely different ways to discuss the issue, and that is why we need many role models. We need more women of this type to speak, who hold leadership positions and speak comprehensibly about gender inequality in science and the investigation so that others do not feel afraid to say what they think.