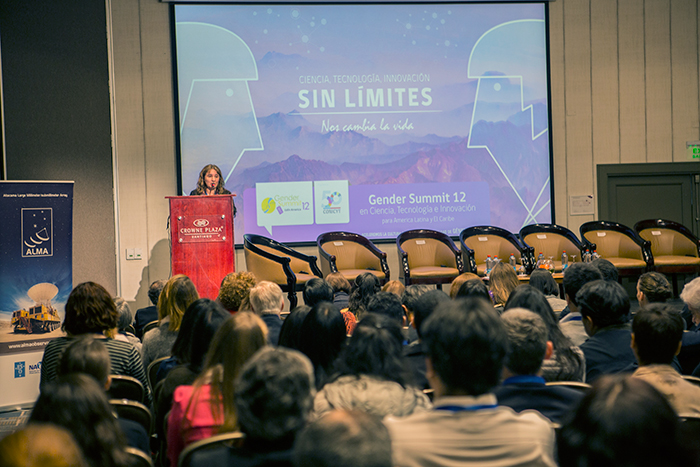 That only 20% of women in our country study careers related to science and technology is a reality that, along with other relevant indicators in the matter, were addressed at the Meeting on Gender Equity in Astronomy and Engineering: How we empower our talent?, organised by ALMA Observatory and the Associated Universities, Inc. (AUI) with the US National Radioastronomical Observatory, which also had the collaboration of the Ministry of Women and Gender Equity, the Ministry of Economy, Development and Tourism, CONICYT, Girls in Tech Chile, Sochias and SOFOFA Innova.

“It is critical for Chile that women become involved in sciences, technology, engineering and mathematics. I hope this meeting will allow us to question what is done from public policies, the private sector and the academy, and how much we would gain in science and innovation if women participated in these areas”, said the Minister of Women and Gender Equality, Claudia Pascual, who inaugurated the seminar.

Regarding the national reality in training and promotion of women in STEM (sciences, technology, engineering and mathematics), the vice principal of the Unit of Studies and institutional coordinator of Gender of CONICYT, Paula Astudillo, made a presentation about the current situation of it in Chile, in addition to mention successful international experiences on the subject.

“According to our study called “National reality in the training and promotion of scientific women in STEM”, only 14% of the management positions in the doctoral areas of the Chilean universities in the STEM are women, which shows a huge gender gap” said Paula Astudillo.

Also, she emphasized the importance of empowering women not only in the higher stages of their careers but also through programs and plans that involve the entire lifecycle. These experiences were implemented by countries such as Holland, Costa Rica and Israel.

In addition, participants were invited to participate in the Gender Summit 12, organized by CONICYT to be held on December 6th and 7th, which seeks to position gender equity in science and innovation. “This is an instant in which different agencies will discuss for the first time in Latin America and the Caribbean the challenges, advances and good practices about gender in research and scientific development,” said Paula Astudillo.

The activity ended with two roundtable discussions on good gender equity practices, aimed to decision-makers within the public, private and academic sectors, as well as to young professionals working in the fields of astronomy and engineerings.